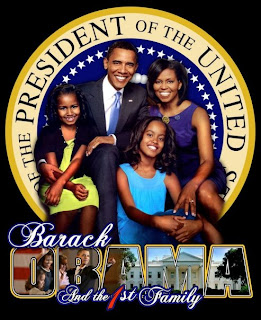 On Novemeber 4, 2008, Barack Hussein Obama was declared to be the 44th President of the United States of America. To me this historic moment meant a lot because as young black woman growing up in America, I was constantly told what I could not do because of my skin color, not because I was not capable, but because other people in high positions were still too ignorant and racist to allow me to do such things. I cried like a baby because I was sooooooo happy.

Yesterday, I overheard my drawing professor talking with a woman (another student who is in the 23 age + program) say that her parents cried (not tears of happiness) but boo-hoo cried because their leader, our leader, is black. I know there have been derogatory text messages passed around, one that said: you're gonna need some water b/c there will be saltines walking around...now I was thinking this is just a bad joke that people should not be passing around, but unfortunately in (almost) every joke, there is some kernel of truth--in this case there was.

There was a classmate who put on her facebook status: well welcome socialism and communism. F*** the N*****s....needless to say she was reported to our school's honor council, whether or not she received punishment is unbeknown to me. My World History Professor at the beginning of class Wednesday afternoon said regardless of who you voted for this is a historic moment and you should be proud that in a country with legal slavery just 150 years ago could have an African American voted into office. There were grumbles such as "history my a**." Oh, my favorite facebook status (i'm being sarcastic if you couldn't detect it): oh don't worry, he'll be assassinated anyway.

These people talk about him like he's not a person, like he's not a father, like he's not a son, like he's not a husband, and like he's not the president of the United States. So has King's dream been achieved. On paper, it has been achieved for years--on paper. I would like to say I am living the dream, people are still racist, but they cannot legally stop me from receiving my college education, cannot legally stop me from living my life of freedom. But examining the hearts and minds of all Americans, some people out there refuse to educate themselves and put aside blind ignorant hate; therefore some aspect of the dream will never be achieved and there will still be a need for affirmative action--for the people in high places who slyly try to hold people back.

Some people are saying "the dream" has been achieved since Barack has become president, but if that truly is the case, then that "dream" was already achieved on Nov. 3, 2008 the only difference was no one had voted yet. I beg to differ--"the dream" has not been truly achieved in that respect; otherwise Barack would not have had to have secret service protecting him since BEFORE he officially decided to run for the presidency.

I say, to those who say "the dream" has been fully achieved because of Barack winning, then it was already achieved when Bush was in office because of all the other accomplishments and jobs and careers African Americans have done. I say, to those who say "the dream" has not been achieved, no it has not, but Barack winning is a sign of it being a long time coming, but we have an even longer way to go. Look at what people said when he ran, he's a terrorist, he wants socialism and things of the like. As soon as the day comes that a Hispanic individual runs for office, people are going to be saying they're going to let all the illegal immigrants in and things of the like, watch.

Until then, I am extremely glad that I can say there is a first family in the history of the United States that looks like my family. Perhaps one day, they can drop the African off of African American, because I have never spent even one day in that CONTINENT (this is to call out the fact that African American does not even specify which country my decedents come from.) I am an American, just like my president, who this time actually happens to look like me (complexion-wise.)
Posted by Kay Rich at Friday, November 07, 2008 No comments:

Janie's Gotta Gun Scene from not another teen movie...

this scene always has me rollin