For the 12th Annual Raleigh Street Painting Festival apart of artSpark my friend Shonta and I decided to work together.  Between busy class schedules and getting ready for graduation, neither one of us really had the time to sit down and come up with a design.  I did not get an idea as to what we should do concept wise until late Thursday night, so I wrote it down to make sure I didn't forget my idea in the morning. 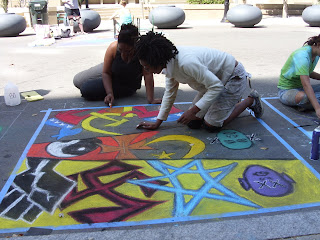 Along the lines of being fed up with constantly having to be PC (politically correct) when around others and certain individuals refusing to talk about current issues, I came up with the idea of juxtaposing the common phrase, "see no evil, hear no evil, speak no evil," with the three taboo dinner conversation topics of race, religion and politics. 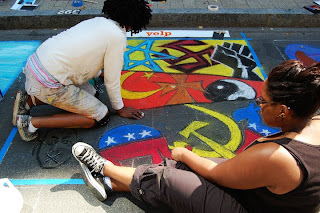 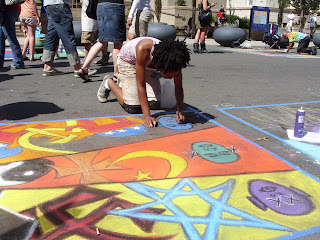 A couple of hours out of Friday afternoon I looked up various symbols and images that would best represent the concept.  Friday night, I met with Shonta, and she was key in finalizing and putting the design together.  She pointed out that without text, we would have to make sure that the image would have to be clear and concise in communicating the concept.  Initially, when I showed Shonta the images I came up with, she jokingly said, "Now Katelyn, don't get us shot!" (lol) I told her we should be fine, but as the night went on, I really began to question if even in the context of our design, would the Swastika next to the Star of David be offensive no matter what.  I did research the KKK symbol, but theirs is actually less recognizable, and current skinheads are against everyone the KKK is against, which includes all people of color.  I decided to call a classmate of mine, Alissa, who I remembered had mentioned in class that she is Jewish by heritage.  In a nutshell she told me it should be fine as long as we were willing to stop and explain our concept to people. 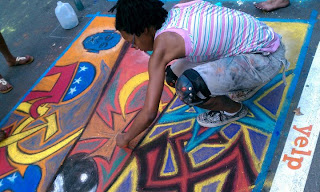 The next day on Saturday morning, when I got started on mapping the design out, a lady, unbeknown to me who was Jewish, as she was walking by smirked and commented, "You're putting the swastika next to the Jewish star?" *snorty fake laugh* I stopped her, explained my concept, and asked should I change it while I "still had the chance" (it was a little before 9am at this point--not too many people were there.) She explained to me that she was actually Jewish herself and was not offended, but of course everyone is different.  Then she jokingly said that it was the first day of Yom Kippur so not too many Jews would be out anyway.  She was a funny lady! (lol) Apparently during our unnecessarily long lunch break due to bad service at The Big Easy a high school kid came by and was ticked off and ranted how one of his teammates is Jewish.  After a classmate chalking out a square next to ours explained our concept for us he said it was ok. (lol) I'm glad I wasn't there, me sit through a high schooler going off on me??? For all intent purposes we are grown women *please*

Shonta and I worked really well together! We also had a lot of fun :) Plus, we won BEST IN SHOW: DESIGN in the college category!!!! 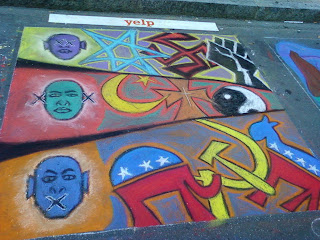 **Extras:
Click to see photograph taken by Simonae Williams of newsobserver.com @ www.triangle.com. And other photos in the album...

Don't eat at The Big Easy!!! The service was horrible TWO YEARS in a row!!! (we ate there last year for lunch--same story, but the food was delicious though lol)

Shout out to Alissa & Mary who got an HONORABLE MENTION!!! MC Represented w/ 5 squares btw--Angels in the house :) 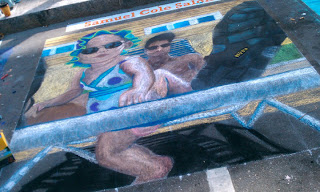 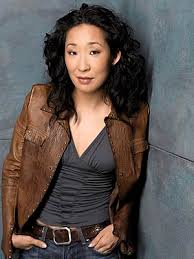 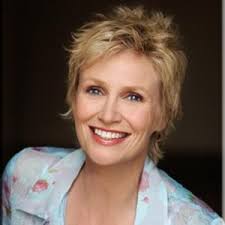 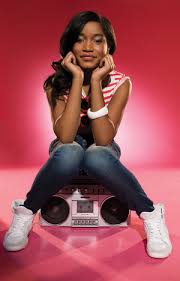 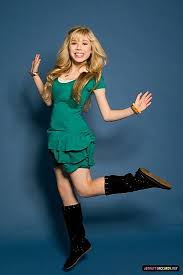 Whoever came up with Jane Lynch guest starring as Jennette McCurdy's mom was pure genius! I want to give them a hug, which is a rarity for me.