A Woman's Worth by Goldie Taylor 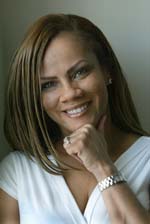 I will not, in the name of history, vote for a woman like Sarah Palin who does not share my values.
But here’s what I will do.
I will continue raising money for Barack Obama. I will get on the phone again and call people in distant states I've never met. I will e-mail, call, and knock on doors until the final vote is cast. I do this, not because he shares my skin, but because I admire his principals and he shares my values. I do this because Barack Obama is more than a community organizer, he is a bricklayer. And he sees -- just as he sees the light in Michelle's eyes -- my struggle, my worth as a woman.
Posted by Kay Rich at Monday, October 13, 2008