This past weekend i participated in Raleigh's groundspark Street Painting Festival and had a blast! The always find ways to make it better each year, and the weather on Saturday was absolutely awesome! The competition started on Friday afternoon, but I had a prior engagement to do spoken word so I could not start until that Saturday morning. I started chalking around 8:30 and actually finished up a little bit before lunch time :)

while i was working on the fist (black power fist) sketch in my square, this light skinned dude (lighter than Barack to give an idea) comes up to me and convo as follows: **let's call him LSD for short** (cuz he was def on somethin....)

LSD: oooh black power fist, huh?
Me: Yes
LSD: how old are you?
Me: 20
LSD: school?
Me: Meredith College
LSD: you go to MEREDITH COLLEGE, and YOU'RE doing a BLACK POWER FIST???
Me: Yes? Is there a problem?
LSD: why are YOU doing a black power fist?
Me: Oh, so if i went to an HBC there would be no problem?
LSD: if you're not going to a HBC you're not supporting the black community
Me: (i basically read him the riot act)
LSD: *silence* *walks away* 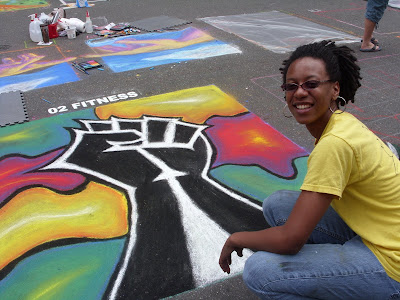 anywho, back to the street painting fest:

I actually won the grand prize for the college category of best in show! It was amazing and very ironic! As it goes, I was not even supposed to do the street fest this year, in fact I had never planned on it. In August I said nah I'm not doing it this year. (lol) However, the prez of a club at Meredith I'm in called Artist Alliance approached me and asked me to fill in for these freshmen who (for all intent purposes) bailed on her. So I said sure I can, and she scratched their names out and put mine in on Friday. I had no idea what I was going to do alllll weeek long. I asked my sister the Friday night before what I should do. She first suggested civil rights then and now but I don't like faces (I was going to attempt Angela Davis and Barack Obama.) I told her since I was a half-day shorter on time, I did not want to have to grid my square and worry about proportions. Then she suggested the black power fist. I did a mini-sketch in my sketchbook but had to think of colors, so I googled pan african colors, which are: green, yellow and red. And bada-boom bada-bang I had a design that most everyone liked. Apparently there were some trash talkers but they weren't near my ears and I don't care, cuz who is gettin that check and certificate in the mail???? why me of course! :) hate on haters lol hate on, and thanks to all my friends who supported me by coming or in spirit!!!!
Posted by Kay Rich at Tuesday, September 22, 2009

You didn't tell me you won! Thats awesommmee! And you don't have to split the check with anyone. Congratssss!