Disney's First Black Princess: The Princess and the Frog 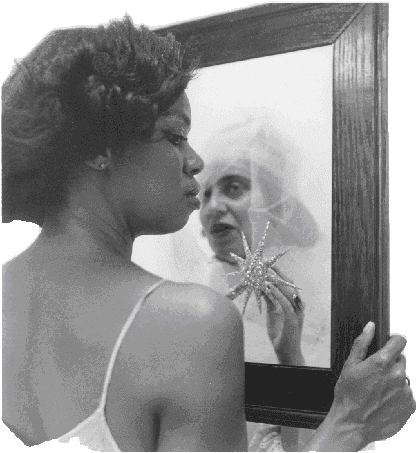 LOOKING INTO THE MIRROR, THE BLACK WOMAN ASKS,

“MIRROR, MIRROR ON THE WALL, WHO’S THE FAIREST OF THEM ALL?”

I encountered this Weems’ photograph during the second to last lecture of my History of Photography class, the class right before Thanksgiving break.  Of course everyone being antsy with anticipation of being on a break—no matter how small—and eating all of the wonderful good America food we would be eating, people, including myself, were hardly paying attention.  However, when the slide containing this photograph came up, I had to stop and stare.  My ears all of a sudden honed in on the professor’s lecture—his voice was no longer just a drone in the background.  How he treated the subject matter was really important to me.  He even briefly referenced the movie that were to come out later when he mentioned, “Yeah, I think Disney’s FIRST black princess is FINALLY coming out this year, and it IS a big deal—even though I think it’s WAY past due.”  Even though he had moved onto another series done by Weems, my brain had not…I thought about all those times when I was little favoring princess Jasmine just because her skin was slightly tan but nevertheless darker than the other Disney princesses.  Although, Jasmine really isn’t a big deal though because prior to 9/11, Middle easterners bubbled in “white” just like white Americans—go figure.  Additionally, I remember never having a Disney princess doll because my parents made it a point for my sister and I to always have black baby dolls…so we wouldn’t grow up with a complex I suppose.  I am so glad the “youngions” in my family will have a black princess and black prince to watch for their entertainment.  Too bad throughout the history of America, in both White and Black communities, being the darkest, most ebony, never equated with being the “fairest of them all.”  In fact, when I was little, I used to want to be darker—and look at me now with dreads and all…I joked around with my family and said maybe Disney got its act together so Obama’s little girls could have something relatable to watch.  I have not seen the movie yet—I don’t like the crowds of opening weekend, but when I do see it, I will be putting another post.  It’s been a long time coming, George Washington and Thomas Jefferson are rolling over in their graves, and I am glad. 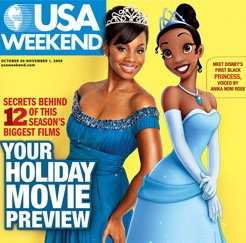